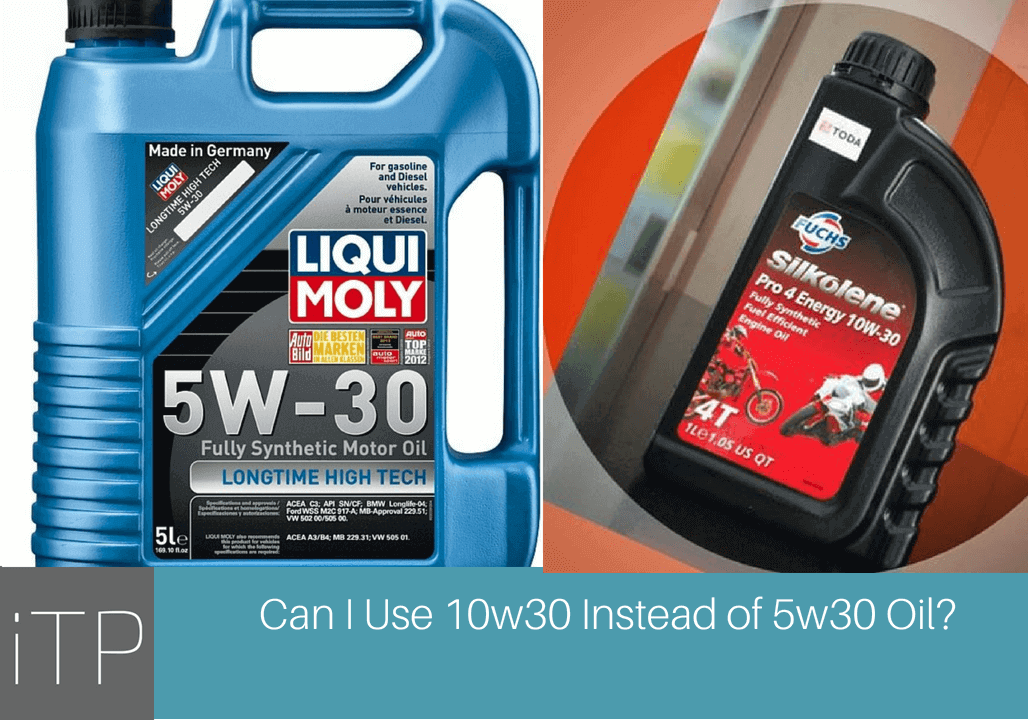 There are a number of oil selections in the market nowadays. It can be overwhelming to select an appropriate one from a wide array of selection. Among these options are 10w30 and 5w30. These oils may be used similarly but they have major difference in thickness.

Oil viscosity plays an important feature in the performance of your engine. The 10w30 is thicker than 5w30. It may be beneficial for old engine since it provides a better seal. Nevertheless, less viscous oils such as 5w30 provides better fuel efficiency.

Most cars utilize 5w30 nowadays since it drags the engine parts and bearings less. Can I Use 10w30 Instead of 5w30 Oil?, it is okay to replace it 10w30 depending should the engine require it. It will not cause any harm or negative effect to your car if the oil is replaced.

In this article, we shall be looking into the differences between 10w30 and 5w30 oil. We shall also identify the effects of viscosity in the engine’s performance. Lastly, we shall determine the reason you can utilize 10w30 to replace 5w30 as your engine’s oil.

What is the meaning of the naming convention?

The naming convention refers to the viscosity grade of the oil. The numbers appearing in front is the low temperature or winter rating. The character ‘W’ in the middle is, in fact, for the word ‘winter’.

On the other hand, the last number refers to the high or upper limit temperature rating. Designed to appear thin during the cold weather, multi-grade oils give your engine protection as it warms up.

How does viscosity of the oil affect your engine’s performance?

Viscosity refers to the ability of the liquid to resist flow. It is commonly known as thickness of the fluid. Oils with higher viscosity like 10w30 flows slower unlike less viscous oils such as 5w30.

It is important to note that an oil’s viscosity changes as the temperatures change. Usually, the thickness decreases as the oil’s temperature increases.

A thicker or more viscous oil seals better than thin ones. It also provides better lubrication on certain parts of the engine.

As oil plays an essential role for the efficiency of fuel, utilizing a more viscous oil reduces the engine performance. It also creates drag on certain engine parts. The resistance caused by a thicker oil can increase the consumption of fuel.

The 5w30 is an oil designed for engine operations at ambient temperatures. The temperature can go low at -30 degrees in Celsius or -22 degrees in Fahrenheit.

This oil is great for those who live in Canada or the north eastern part of the United States. Moreover, it can also perform well on locations with warm climate. It can handle temperatures of up to 35 degrees in Celsius or 95 degrees in Fahrenheit.

On the other hand, 10w30 provides a smaller window in terms of temperature. Compare with 5w30 that performs well in both cold and warm climates, 10w30 can handle temperatures between -18 to 30 degrees in Celsius or 0-86 degrees in Fahrenheit.

For temperatures below 20 degrees Fahrenheit, utilizing a 10w30 oil is not an issue. Nevertheless, if you encounter an extremely cold weather, it is recommended to warm it up for at least 30 seconds before you drive.

There is no major issue should you use 10w30 instead of 5w30. Sometimes, it is even preferable to get thicker oil when running on engines with higher mileage.

Another minor benefit of utilizing 10w30 is that it contains less improvers in viscosity. It is known that improvers aid in the behavior of thicker oils at high temperatures. Nevertheless, it does not provide additional lubrication.

In general, there are no negative or harmful effects if you used 10w30 instead of 5w30 on climates that are not on extremes. Moreover, there may be a little benefit as it is good for engines having with high mileage and contains less viscosity improvers.

How can you change your oil?

The engine oil lubricates the moving parts of the engine which are found internally. Having an inadequate lubrication may cause the parts to quickly wear out. It may also lead to engine failure.

If you are encountering issues with the oil filter or you just want to change the kind of oil you are using, you can have your oil changed. You should remember that oil replacement should match the specifications required by your vehicle.

You may need the oil change services of your auto-repair shop in doing this. The average cost of oil change is around 100 to 120 US Dollars. Nevertheless, there are some independent mechanics that can complete the task under 100 US Dollars.

After an oil change, it is ideal to run your vehicle for a few minutes. Make sure that it does not encounter any leaks that can potentially damage your engine.

One of the commonly used multi-grade oil for vehicles is 5w30. It is great to use for low temperatures when starting. It also works well on high or warm temperatures. It provides better fuel efficiency since it drags the engine parts and bearings less.

On the other hand, 10w30 offer several benefits despite being more viscous. It offers better capability with regard to sealing older engines. Note that the clearances for older engines widen. It requires thicker oil to protect them better.

With these in mind, select the more appropriate oil for the state of your engine. Both oils can be used but one of them may offer better benefits to your vehicle. It is also pertinent to consult your auto-repair professionals to get their thoughts on which one is preferable for your vehicle.

How to Protect Leather Car Seats from Wear

How to Remove Bird Poop from Car Without Washing?